Joe Larson, a live and virtual comedian, host of the “Zoom Bomb Comedy“, personal trainer and does a funny fake “Golf Pro” experience. He performs shows for corporations and associations around the country.

Meet the second generation of working comedian dads, JOE LARSON! His career started when he was chosen College Comedian of the Year at the Las Vegas Comedy Festival, nominated Best Up-And-Coming Comedian at the NYC MAC Awards, and was a finalist in both the prestigious Johnny Carson Great American Comedy Festival and the Boston Comedy Festival. His popular blog, I’m Not a Dad, I’m a Man with a Baby is enjoyed by many.

If you haven’t seen him killin’ it on stage, you might have heard Joe on the nationally syndicated Bob & Tom Show on Sirius XM; seen him in television appearances on NBC’s America’s Got Talent, The Tonight Show’s Laugh Squad, as a host and comedian on Laughs on FOX, feature for Gotham Comedy Live on AXIS, and as a series regular on Discovery Family’s Babies Behaving Badly. He’s even had the time to be a featured comedian on the film, Stand-Up 360. Joe regularly performs on cruises, clubs, and corporate events, and his newest super clean half hour, Champion is killin’ it online with millions of views. 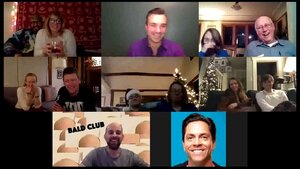 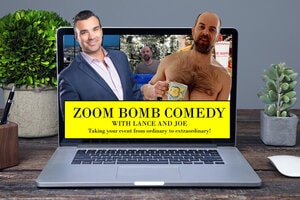 Veteran comedian Lance Weiss from  MTV, FOX, the Today Show and much more and has teamed up with Joe, to create a new and truly unique virtual comedy experience.  Zoom Bomb Comedy!  It’s a comedy show that is written, tailored and created for each event its a part of.  Its the stand-up comedy you love with a spontaneous and exciting twist!

Each show will feature Joe Larson performing stand-up comedy and at several points during the show, Joe will be interrupted by zoom bomber Lance Weiss resulting in a wild and hilarious exchange.

Some of the ways they have tailored the Zoom Bomb Comedy! for a client: 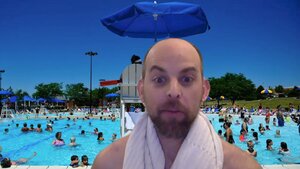 Each client we will have a brainstorming session with so we can come up with these ideas.  Being able to insert photos as background or images on the screen allows them to bring a lot of the client into their show.

“I can’t say enough about how great Joe and Lance were to collaborate with on this, and the results were terrific!  It has everyone in our group still talking about it.  Lance and Joe really aimed to please and talked through the specific context of this event with me and came up with ingenious and funny ideas tailored to the moment.  And then he executed the Zoombombing with confident comic brilliance. Highly recommended!” -Derek G., Washington, DC

“You don’t have to get stuck in another typical video meeting. Get Joe. Get Lance! That’s an experience.”-Denise, NYC

“The main feedback we got from the team was ‘This sets a high bar for company meetings,’ which makes me feel bad for my own ability to lead meetings, but shows the high bar they set.”  -Will, NYC

“Hilarious, silly and so much fun! “ – Steve G , Anabau Enterprises

He has hosted a ton of events including the nexus insurance awards, the nyc public school gala, Brooklyn acting labs annual fundraiser and many many more. He loves the challenge of writing jokes for the event that are funny and inclusive. For many of the events, when the event called for it, he put together PowerPoint presentations that people really loved.

Hire Joe Larson – as a live or virtual stand up comedian,  his unique virtual experience “Zoom Bomb Comedy! or as a funny fake “Golf Pro” expert. for your next event.

"Joe Larson did an amazing job. He was personable, super funny, and got the crowd involved in a non-intimidating way. I was laughing so hard I was crying and my stomach hurt. All the employees after the event were talking about how funny he was! It felt good to laugh! 5 stars!"