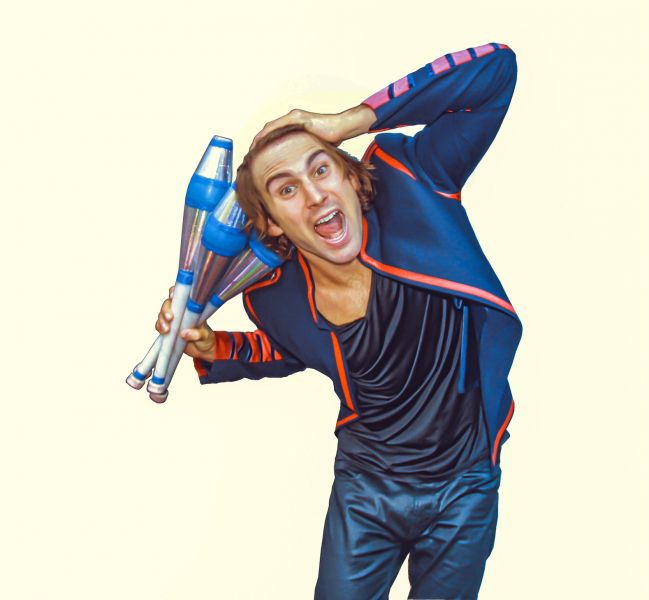 Marcus Monroe is a New York City-based, award-winning comedian and juggler. His show is a high-energy blend of innovative juggling with in-your-face comedic banter riddled with awkwardness. This makes him one of the most sought after variety performers. Not only is Marcus giving comedy juggling a much-needed makeover, but Marcus is taking a strong lead in the new generation of variety performers.

Marcus is also a favorite with corporate events working with companies ranging from Harley-Davidson, Goldstar, to Threadless to speaking at TedxBroadway.

He is the recipient of the prestigious Andy Kaufman Award and has recently appeared on The Late Show, HBO, MTV, and Netflix. The New York Times has selected Marcus’s show as a NYT critics’ pick 4 times and calls Marcus “one of the most entertaining performers to watch in New York City.” He is a favorite among cruise lines, performing arts centers, comedy clubs, universities and festivals. Most recently he has performed at the New York Comedy Festival, Bonnaroo, TedxBroadway, and Outside Lands along side with Neil Patrick Harris. Marcus co-starred in the Olivier Award winning Off-Broadway and London production of La Soireé. In 2017, Marcus took his one-man show ‘The Rise and Fall of Marcus Monroe’ to the Edinburgh Fringe Festival earning raves and multiple 5 star reviews. Marcus is currently touring and preparing for the release of his comedy special coming out later this year.

The refreshing bolt of comedy that everybody needs right now, Marcus Monroe’s virtual show is filled with his high-energy blend of innovative juggling and laugh-out-loud comedic banter, riddled with awkwardness.  An award-winning comedian and juggler, Marcus customizes his virtual experiences to maximize laughs, keeping your community engaged.  A master of improv and dry wit, Marcus frequently appears at the world-famous Comedy Cellar in New York City and has been featured on The Late Show, Late Night with Seth Myers, and MTV, among others.  So sit back and relax, but don’t get too comfortable because you never know what’s happening next!

Email or call Funny Business to get more information or to hire Marcus Monroe for your event.