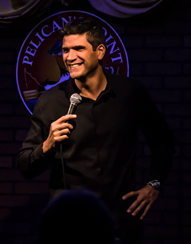 Clean, corporate comedian Dean Napolitano is a throwback to the great comedians of yesteryear only with a modern twist that makes him one of the most prevalent comedians working today. A true storyteller with imaginative delivery that makes audiences feel as if they have been through each experience themselves.

Born in Long Island New York, Dean  Napolitano first cut his teeth on the comedy scene working for clubs throughout Florida and the Southeast. Napolitano has been seen on the small screen in a variety of shows on various networks. His TV credits include: Army Wives (lifetime), Burn Notice( TBS),  Good Morning America, Three Rivers (CBS),  What About Brian (ABC), Heroes (NBC), Las Vegas(NBC), The Shield (FX).

Dean is also a favorite among Hollywood’s elite opening for the likes of Don Rickles and Joan Rivers, and he is on the talent roster of the world famous Messina Baker Entertainment Corporation that represents such Hollywood heavyweights as Drew Carey, and Tim Allen.

"I cannot tell you how happy the league was with Dean Napolitano's performance. We have a very diverse crowd and Dean managed to cater to all of them , with ease style and of course great comedy"

- Sachi Y- President of Junior league of the Palm Beaches

"Fabulous Job! I was in on the planning, so I knew what he had to work with, He skillfully covered all our material, and wove in more. Both appearance and facial expressions were perfect. He really had people going and most of all laughing at ourselves. I would definitely hire him again"

"Dean was hilarious, kept it clean and everyone loved his nostalgic style and story telling. This was our second year having Dean and he didn't disappoint"

"This is our third time using Dean and he always does a great job. This year he hosted our team building exercise, did our awards show and closed it out with a great comedy show, he even roasted the President and VP of the company. They loved it."