It’s hard to believe that Gilda’s LaughFest 2017 has already come and gone. Each year LaughFest demonstrates why it’s the best comedy festival in the country (in our humble opinion), and this year was no different.

Now that things have settled back down, we decided to look back at this year’s festival.

Community Kick off – The Mannequin Challenge

I had a lot of fun participating in this year’s Community Kick Off. Each year LaughFest has a unique and fun way of bringing together the community to kick off the 10 day festival: This year they had a mannequin challenge!

For those unfamiliar with the ‘Mannequin Challenge,’ it’s where people hold their poses for an extended period of time while there is live video being taken, giving the appearance of being a mannequin. The camera is often mobile while passing through and around the participants. In this instance, Deep End Films used their drone to get an overhead shot, then moved the camera by hand.

LaughFest organizers divided up everyone into separate groups and areas throughout Rosa Park’s circle in downtown Grand Rapids. I was put in the ‘Laughter Yoga’ group! Here’s me trying to hold my ‘Laughter’ pose:

It was a bit cold out, and it was a little hard to hold a pose for such a long time but when you watch the final product, you can see it was worth it. It was nice to see so many people come out to kick off the festival despite it being a little chilly.

A LaughFest and Grand Rapids favorite, Sinbad once again brought out a huge number of fans to the Fountain Street Church.

Joel McHale was one of the comedians to come the first weekend of this year’s festival. He filled DeVos Hall with nearly 2,400 people.

This year’s signature event headliner was Emmy Award Winner Howie Mandel. Howie can be seen as a judge on NBC’s America’s Got Talent.

I’ll be honest – I went into this show feeling a little uncertain, but I’m really glad I went because it was a great show! Modeled after the newly signed ‘Comedy Jam,’ this show featured local comedians who first performed a 15 minute set, then lead vocals with a live band.

Judges consisted of to two local media personalities, an audience vote and two of the comedy industry’s finest journalists: Dylan Gadino of LaughSpin.com and Julie Seabaugh.

Congratulations to Mike Paramore who took home the prize! 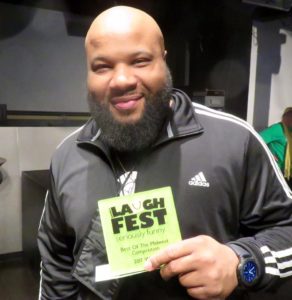 As part of LaughFest’s ‘For the Health of It’ series, DisArt partnered with LaughFest to bring in the sand-up comedian Samuel J Comroe, whose act touches on what it’s like to live with Tourette’s Syndrome.

The LaughSpin Panels moderated by Dylan Gadino have become a regular addition to the festival these past few years. This year’s panels were on ‘Health and Humor’ and ‘Comedy and Politics.’

One of the artists that generated the most excitement and enthusiasm was Iliza! Her fans absolutely love her and for good reason! She put on an excellent show.

Steve Lemme & Kevin Heffernan are two of the members from the comedy group Broken Lizard, who were behind the films Super Troopers, Beerfest and a few others. They came the second weekend of the festival.

This year’s National Stand-up Comedy Showcase was packed with talent! Showcased were some of the nation’s best stand-up comedians, many who have a number of TV credi

These were just a few of our highlights of the festival. It’s hard to summarize all of the many other shows and activities that happened over the 10 days.

LaughFest’s goal is to bring together the community through programming and events that bring into awareness the benefits laughter has on our emotional health and well being.