An Interview with Magician/Mentalist Jym Elders

Click here to get started!Are you looking for a fresh, unique and mind blowing entertainer for your next event? Then you may want to keep reading to get to know Jym Elders.

Jym Elders is a mentalist and magician out of Chicago who specializes in entertaining at corporate events, college events, trade show events and more. His act incorporates mind reading, predictions of the future and thought transference.

Read this interview I recently did with Jym to get to know him better.

How did you get into performing?

For me it was a leap of faith. My first audience was also a sizable one. It was for a passenger talent show on a cruise ship. I was 17 years old and the guy who went on in front of me was celebrating his 50th wedding anniversary. He serenaded his wife and brought the house down. I was nervous about having to follow that, but I got a standing ovation and for the next few days on the cruise people asked me if I was a professional entertainer.

My mentalism show involves mind reading, predictions, blindfolding myself with coins and duct tape and revealing thoughts of people in the crowd. It always involves a great deal of audience participation and you are guaranteed to both laugh and be amazed.

What drew you to Mentalism and Magic?

Growing up I’ve always been fascinated with all things magical and mysterious. And as I began to study psychology and the human mind, mentalism was a natural transition. It’s more than a career for me. It’s my life’s passion.

What’s your most embarrassing moment in your career as a mentalist/magician?

I was performing outdoors once and the finale of my show was a prediction of a random phone number that was called out by audience members. I had it drawn out really big across a roll of wrapping paper. Well, I forgot the prediction back in my car. So after the number was called out, I then realized where I had left it. I sprinted about 100 yards back to my car to retrieve it. Needless to say it was anticlimactic. But you learn from your mistakes and that has never happened since!

Many, many years ago I decided to do a tent show at a local pumpkin farm during the Halloween season. I put a tremendous amount of time and effort into it. Not only did I created a Halloween themed show, but I did everything from constructing the stage, building benches for people to sit on, selling tickets and promoting the show just prior to actually performing it. It was a real labor of love, and I was a bit nervous if it would all run smoothly. During the first show people laughed, cheered, and seemed to thoroughly enjoy it. It brought a tear to my eye because I worked so hard and doubted myself at first. Later that night, a massive storm came through and ripped apart the tent. The next day I found my entire show scattered across the field. Then I had tears for a different reason. 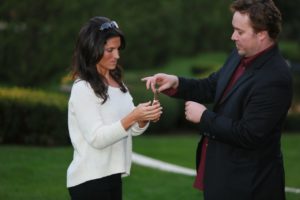 What is the most memorable reaction you’ve gotten from your mentalism?

It’s every artists goal to illicit an emotional response from their audience. Of course laughter, applause, and standing ovations are great. But it’s not uncommon during my show to hear someone get emotional and tear up. I try to create a show that is similar to a great movie in that it has texture and puts you through several different emotions in the course of the show. To see someone cry because they are moved emotionally is a beautiful thing. Oh, and there was another time where a priest was in the audience and he was so amazed by something I did he shouted out “Get the f*** out!” That was hilarious.

What advice do you have for those planning events?

Know your audience, get a feel for what they like. But also don’t be afraid to try something a bit different. Communicate with the entertainment agency and you’ll find they can help you with new possibilities that you may not have thought of. Also, ask the performers their advice. Sometimes a planner will have a set notion in their mind about how the evening will unfold. But seasoned performers have a lot of experience and can often help make your job easier by making a few slight adjustments.

In my experience they sometimes either over prepare or under prepare. Some planners feel that after they have hired an act that their job is done. On the other side, I’ve had elaborate lighting and other gratuitous things set up that I really didn’t need, which could have saved them time and money had they talked to me first. Oh. And also don’t read a performers into card (which they wrote) by saying “ok, here’s some information they wanted me to tell you about them”!

What do they do really well?

When there is open communication and they are easily accessible. For me, I don’t require too much set up, but I do like to know a few things like the logistics of the room, how many people will be in attendance, whether or not there is other parts of the program either before or after you etc. 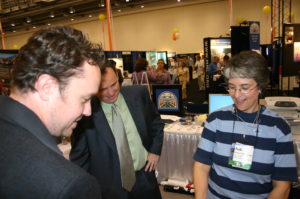 What’s one thing an event coordinator did that made a really positive impression on your experience?

When I arrived at one performance I noticed that they had a huge gap between the stage and the audience. It was a dance floor that they left open. This can sometimes be the kiss of death to a performer because it alienates you from your audience (and vice versa). So when I found out that there wouldn’t be any dancing going on at all, I asked if I could draw the tables in closer. The event planner was very gracious in helping me out with that and in the end it DID make for a much better performance.

Call (888) 593-7387, email us, or fill out the form below. Our friendly, no-pressure experts will reach out within 24 hours to walk you through the process and all your booking options.
Tell Us More
Trending Posts