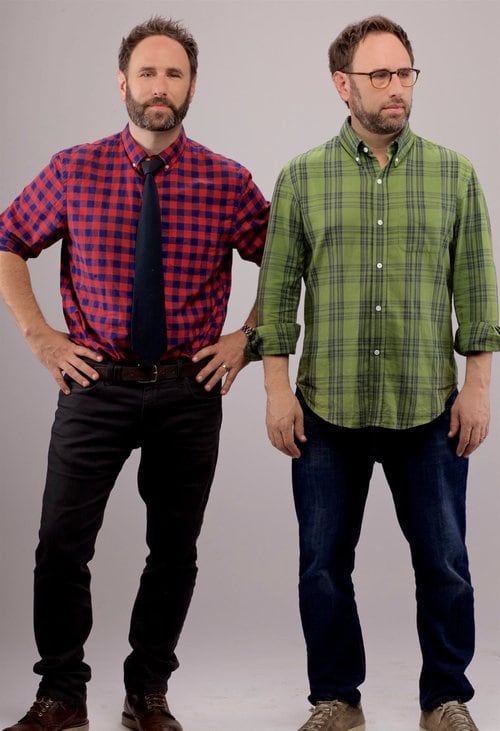 Book the Sklar Brothers for your next corporate event, sales meeting or convention entertainment.

The Sklar Brothers, are a post-modern take on a stand-up comedy duo. Neil Strauss of the New York Times once wrote “Their comedy accepts the reality of being twins but does not use it as a crutch. Instead, they work their physical and mental similarities and correspondences, their status as imperfect carbon copies of each other. In their comedy, the straight man is often an echo.” They have released 6 critically acclaimed comedy albums, have had two Comedy Central Half Hour Presents specials, and currently have a one hour stand up special on Netflix, titled “What Are We Talking About” and another one hour special that premiered on the Starz Network in May of 2018 called “Hipster Ghosts”. Hipster Ghosts is still available on the Starz App or at starz.com.

Randy and Jason are also writers, directors and actors appearing in a wide variety of shows from Entourage to It’s Always Sunny in Philadelphia to Curb Your Enthusiasm to Better Call Saul. They are currently recurring characters, the Drs. Green, on TruTV’s Those Who Can’t. However, they are perhaps most well known for their show Cheap Seats, a cult hit that appeared on ESPN Classic for 77 episodes.

Their popular sports/comedy podcast View From the Cheap Seats is available on the Starburns Podcasting Network. Their hit podcast Dumb People Town with cohost Dan Van Kirk is currently being developed as a narrative animated show with Sony for YouTube Premium.