Mark Toland is an international award-winning mind reader. His entertainment is the go-to choice for major corporate and college events around the world. Mark has been featured on ABC, CBS, NBC, FOX, WGN, NPR, SiriusXM, and WBEZ.

In 2019, Mark was the artist-in-residence at the Chicago Magic Lounge and Liberty Magic (Pittsburgh) with his hit show “MIND READER”. ABC called Mark “The best we’ve ever seen!” and Broadway World called it “A standout performance of mind over matter.”

Mark has also correctly guessed the outcome of the NCAA Men’s Basketball Tournament, predicted the headlines of the Chicago Tribune, and bicycled through Chicago traffic completely blindfolded.

After multiple appearances on WGN TV in Chicago, Mark was hired to create and star in a 12 part WGN Radio Web Series. Mark is also a two-time TEDx Speaker, has been featured in Campus Activities Magazine, and was a featured performer at Disney World. Today, he performs hundreds of shows each year for exclusive events worldwide.

Use Mark’s strolling mind reading to break the ice at Cocktail Parties, Networking Events, and Receptions.

“A STANDOUT PERFORMANCE OF MIND OVER MATTER.”   – BROADWAY WORLD

Hire Corporate Mentalist Mark Toland for your next event. 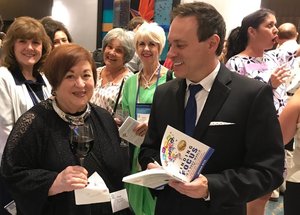