Trade Show Magician Chad Long is known within the magic community as the magician’s magician. Chad was recently the first place winner at the International Magic Convention in London, England. His casual, engaging comedic style which hides his incredible dexterity has garnered him legions of fans around the world!

Chad Long has been performing his unique brand of magic since the age of thirteen. Chad has demonstrated his skill in front of delighted audiences in the United States and abroad. Chad has a 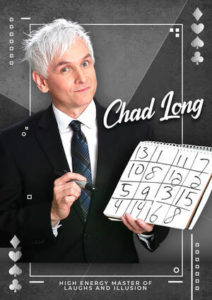 casual, engaging performance style, which mixes comedy with audience participation. Chad performs regularly for Fortune 500 companies at trade shows, hospitality suites, sales meetings, banquets, and private parties. Chad has received accolades from his peers as well as numerous awards. He appeared on the cover of the industry’s #1 magic magazine and was just nominated for Magician of the Year from the Academy of Magical Arts. He’s authored several booklets on magic, and his tricks have been featured in magic publications and videos around the world. Chad Long is a highly polished entertainer whose extensive repertoire is appropriate for casual occasions or sophisticated affairs. For a memorable, magical experience, you can’t go wrong…with Chad Long!

“Chad Long is both brilliant and hilarious.”— David Blaine

“You were amazing tonight.” — Elon Musk

From large seminars to VIP meetings, Chad’s versatility always brings the energy you need to your most important events.

“I have used Chad Long for events of 200 and 1200. His sleight of hand mesmerized our guests and left them asking for more, which is why we’ve brought him back
for 5 years in a row. Chad is a true professional and always the life of the party.”  — Dave Pietrowski, RT Specialty 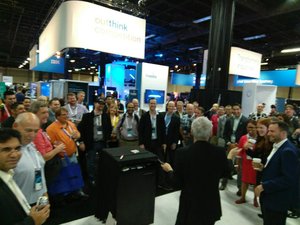 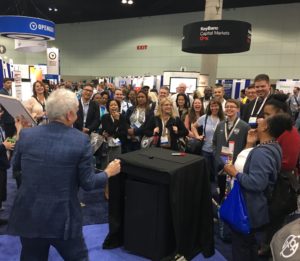 “Chad has done such a great job for us over the last ten years, attracting crowds, keeping them engaged and delivering our product message.
I can’t recommend Chad highly enough.” — Dean Cost, Bayer

“I have enjoyed working with Chad so much over the years. The way he weaves messaging, his sense of humor and the way he captivates the audience is amazing. Chad’s always been my first choice for trade show entertainment. He is simply the best at what he does!”  — Krystin Jarrell, Hyland Software

Chad does amazing sleight of hand for receptions, grand openings, product launches birthdays, weddings, anniversaries…whatever you’re celebrating, make it even more memorable with magic! Chad has the perfect trick up his sleeve to take any event to the next level.

A high-tech (and high-hilarity) productivity talk that’ll get your attendees rolling in the aisles. Customizable for any corporate event or audience size.

Hire magician Chad Long for your next event.

“Chad worked with us at the Microsoft Ignite event in May of this year. [He] was amazing to work with and a big help to our booth traffic in attracting people, keeping them in our booth and sharing our messaging & branding. I could not have been happier with his effort, his professional approach and the end result of his work. Chad is a rock star!”