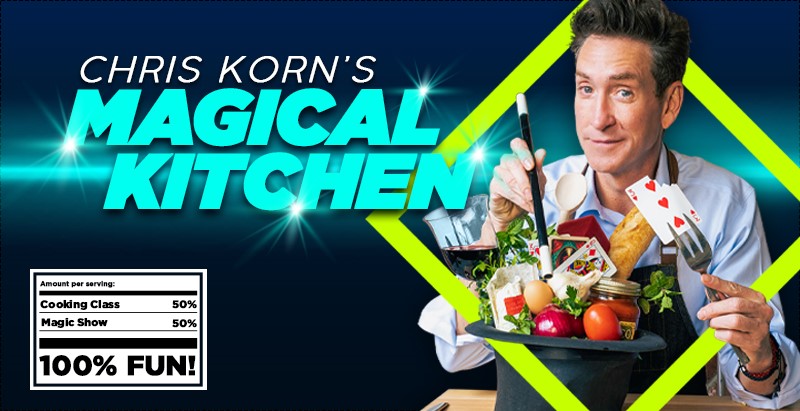 Chris Korn is an accomplished magician and chef.  He will guide you magically through learning two dishes that are so easy that you will be left marveling that you can create such magic in your own kitchen. Chris brings 36 years of culinary and magical experiences from over 30 countries to his 74 million views on worldwide television.  His forthcoming cook book has already received raves from chefs around the world.  Known as a magician’s magician, his magical performances have made him the featured performer internationally.

Well in advance of the event, you will receive a simple list of easily available ingredients, so you are all set when the fun begins.  For the next 45 minutes, while you are making these incredible dishes, you’ll be amazed by Chris Korn’s eyepopping sleight of hand and magic, entertained by his engaging stories (such as his command performance for Queen Elizabeth II of England) and intrigued by some cool kitchen hacks (such as how to scramble an egg in its shell).  This fully interactive show/party/class is unlike anything else you’ve seen before.

Now it’s your turn to become a magical wizard in the kitchen.

Globally renowned magician Chris Korn has captivated audiences in over 20 foreign countries – from Japan to South Africa – and in over 100 cities in the United States, showcasing his extensive repertoire of ecstatic illusion.

Since starring in his own series, MONDO MAGIC on A&E, MONDO MAGIC SINGAPORE, & MAGIC ASIA on AXN (the #1 TV show throughout Asia and Singapore), Chris Korn has come to be known by the show’s 74 million viewers, as not only one of the most talented sleight-of-hand magicians in the world, but as an amazing over all entertainer.

Brad Pitt, Angelina Jolie, JJ Abrams, Jon Cusack, Alicia Silverstone, Brook Shields, Alec Baldwin, Adam Sandler, and Jeremy Piven are just a few, among many celebrities, who can claim Chris Korn to be the one illusionist they will never forget.

Call or email Funny Business Agency to book the Magical Kitchen Virtual Chef Experience for your next event.