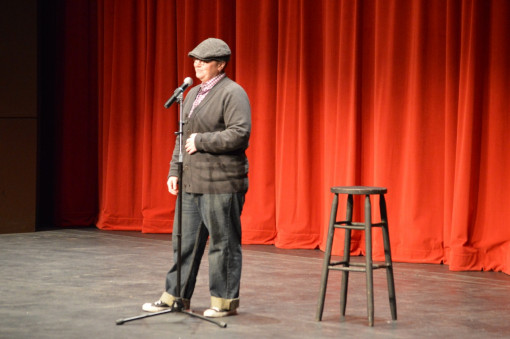 Hire college comedian Maggie Faris for your next college event! Maggie is noted for her ceaselessly cheerful personality and seemingly endless series of quirky, intelligent jokes dissecting our fears and social barriers. 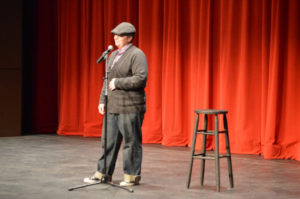 Maggie is a comedy competition assassin. Audiences and judges love her. She won the Minnesota Laugh off. Another competition win made Maggie the Public Address Announcer for the St. Paul Saints professional baseball team, which led to an appearance on ESPN™s Cold Pizza for her unique style and memorable announcements. She beat out Tig Notaro to win both the Funniest Clip of the Year and the Silver Nail award at the Aspen Comedy Festival. She was also voted “Best Comedian” by her Minnesota peers.

Maggie has also been invited to perform at Boston Womens Comedy Festival, Gilda’s Laughfest, Out Loud Comedy festival in San Francisco, Laugh Your Asheville Off, and best of the fest in the 10,000 Laughs Festival and the first Madison Comedy Festival.

Curve magazine named Maggie Faris one of the Funniest Lesbians in America.
She recently won The Advocate Magazine’s national search for the Next Funniest Queer Comedian.

Read our Interview with Maggie Faris

Call or email Funny Business Agency to hire Maggie for your next event.

"Maggie is hilarious and was a delight to work with."

"Hilarious and easy to work with"

"We absolutely loved having Maggie perform here at UWM. The students had nothing but positive things to say and from where I was standing, there was nothing but laughter."

"The night went amazing! We had a great turn out and Maggie and Janna were outstanding! Maggie is such a relatable person and she was interested in so much more than just getting her performance done and getting out of there. We sat down for about 20 minutes before the show and just talked and I thought that was the best part."

"She is a great person and the students loved her!  Honestly one of the nicest people ever, she is amazing.  Thank you for everything."