Mac King is an award-winning corporate magician who is hailed by many as the premiere comedy magician in the world today. Mac King was named “Magician of the Year” by the Magic Castle in Hollywood, just broke a Guinness World Record, just appeared on his seventh TV special for NBC-TV, just rocked on the Late Show with David Letterman, and has been regarded as one of the top 5 shows in all of Las Vegas for the past ten years. 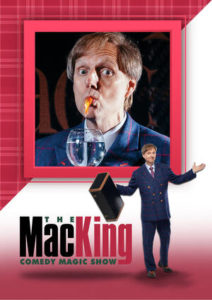 He is currently starring in the long running The Mac King Comedy Magic Show at Harrah’s Casino and Hotel in Las Vegas where, over the last 11 years, he has performed an incredible 5720 shows to nearly one and half million fans.

Over the last 19 years, he has performed nearly 10,000 shows to more than two million fans. His astounding sleight of hand and irresistible humor has been seen both live and on television in China, Spain, Japan, Germany, Australia, Denmark, Sweden, England, Argentina, Holland, Cuba, Mexico, Finland, Canada, Chile, and Portugal.

“The greatest comedy magician at least alive today, and maybe who ever lived. Mac King is a god.”  -Penn & Teller

Before he moved to Las Vegas to star in my own one-man show, he spent 200 days a year traveling and entertaining folks at after dinner banquets for groups like Microsoft, Nationwide Insurance, Apple, Nissan, AT&T, and hundreds more. Even though I now have a full-time gig here in Las Vegas, he is still available for select dates to perform for your group (even if it’s not in Las Vegas).

"#1 Ranked Comedy Magician in the World"

"Best Comedy Magician! That was GREAT!"