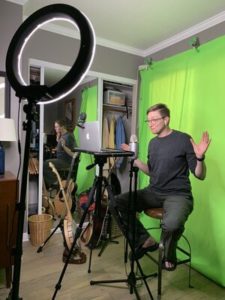 Most recognized from NBC’s “Bring the Funny” and “Last Comic Standing”, Kristin Key is a 20 year nationally touring musical comedian. This preacher’s daughter started her career in a small town comedy club in West Texas at the age of 19. Throughout her 20’s she paid her dues in comedy clubs, bars,casinos, and military bases across the country. It paid off. By 25 she was performing to millions on NBC’s Last Comic Standing. She was one of the youngest contestants to advance to the finals.

Key continued to appear on a variety of TV shows while still performing musical stand up comedy all over the world. She has released 5 full length comedy albums as well as a music comedy album.

She has been seen on NBC’s “Bring the Funny”, “Last Comic Standing”, the Dry Bar Comedy special “Kristin Key: Crafty”, Comics Unleashed, VH- 1’s 100 Greatest Series, The Bob and Tom show and she is played regularly on Sirius and XM Satellite Radio. She currently hosts the comedy podcast “Kristin Knows Blank” and hosts two weekly web series “Mad Mondays” and “Friday Live at 5” which can be viewed on her social media.

In 2020, Kristin has brought her comedy & musical songs to virtual events. Since the pandemic, Key has been performing non-stop on a variety of remote platforms. Kristin’s feel good energy and upbeat comedy draws you in and makes you forget you’re watching comedy on a computer screen. She uses music to elevate her comedy and engages with her audiences so that no two shows are the same. Her observations about the world and her musical spin on every day life makes her a “Must See!”

Call or email us to hire Kristin Key for your next live or virtual event.