For nearly two decades Keelan Leyser has been providing blue-chip companies worldwide with conference presentations that combine a potent blend of cutting-edge psychology, state of the art digital illusion, mentalism, corporate theatre and quick-witted humor to illustrate hard-hitting and practical strategies for business that will entrance your delegates and help to boost your bottom line.

Keelan Leyser is known to be one of the World’s leading magicians. Keelan specializes in creating magical illusions with the latest technology. Keelan’s career spans 3 decades from being a child star at the age of 14, winning numerous Junior Magic Championships and being the guest on many Television shows and the subject of a BBC 1 documentary in his early life to culminating in winning the title of British Magic Grand Prix Champion and British Magic Champion of General Magic at the World’s Largest Magic Congress in Blackpool England.

Keelan has performed for both the King’s of Saudi Arabia and Bahrain as well as Prince Charles. Keelan has also performed on over 100 television shows across the world including having his own half and hour documentary made about him by BBC1 called ‘The Magical World of Keelan Leyser’ voted Best Children’s TV program by the Daily Mail, he had a ten part TV series called ‘Playing Tricks’ which was broadcast in over 16 countries as well as guesting on a whole host of prime time television shows across the world.

Keelan’s YouTube clip of his performance on Penn and Teller Fool Us has gained over 15 million views, he performed on the French TV show called ‘The Best’ and performed on a TV show in China for Chinese New Year live in front of 110 million people as well as being a regular performer on the USA TV series Masters of Illusion broadcast on the CW channel.

Keelan is regularly invited to perform and speak on television, award ceremonies and conferences worldwide and his creations have been used for viral marketing campaigns by some of the Worlds largest companies. 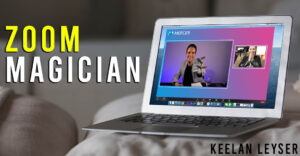 Due to the current social distancing advice virtual entertainment via Zoom, Skype and Webex has become extremely popular throughout the world for conference, product launches and even private parties. So because of this Keelan has set up as a Zoom Magician and created an interactive online magic show using video conferencing software with amazing interactive magic and mind reading.

Keelan Leyser keynote presentation is perfect for conference openers or closers when you want something informative but light hearted and engaging and relevant to today’s audience.

Keelan demonstrates how he has embraces the Digital revolution and staying ahead of his peers taking traditional sleight of hand effects and by embracing new technology has brought his act bang up to date and relevant to todays audience which in turn culminated in him winning the the title of British Magic Grand Prix Champion at the World’s largest magic congress.

Enhance your business thinking by having the imagination of a magician.

Fill out the form on the right to get more information or to hire Keelen Keyser.

“We wanted Education by Entertainment, we wanted real magic and that’s exactly what we got! “

"The way in which Keelan Leyser put over business messages was excellent; mixing humor, digital magic, mentalism and business fact with the right balance means that audiences will retain the serious message contained within this presentation."