Justin Willman is a corporate magician (live or virtual) who wants to melt your brain while making you laugh. He’s best known as the star and creator of the hit Netflix series Magic For Humans.

You may recognize him from one of his many television appearances (The Tonight Show, The Today Show, Ellen, Conan…). Or maybe you know his work as a host (Cupcake Wars; Halloween Wars; Win, Lose or Draw…). But his greatest trick to date was receiving a standing ovation from President Obama following a private performance at the White House. How did he do it? Magnets.  Or maybe he’s the child magician you hired in suburban St. Louis in the ‘90s. If you don’t know Justin, he’s a magician and comedian who’s mastered the art of turning cynics into believers (or at least getting them to laugh). His live show is simultaneously mind-blowing and hilarious, and will likely keep you up at night wondering how the heck any of it was possible.

MAGIC FOR HUMANS at HOME with JUSTIN WILLMAN is an interactive hour of magic, comedy, and surprises delivered directly into your living room.

“It began as a DIY live-streaming experiment in quarantine to help magician Justin Willman distract himself from the loss of his mother. It became an international Zoom sensation drawing over a million viewers and counting.” —UPROXX

“The most popular virtual magic show in the world.” —Today Show

The L.A. Times called him, “A new breed of comic who’s making magic cool again for grown-ups. “ Playboy dubbed him, “The freshest and funniest magician working today.” Time Out says his live show, “Has to be seen to be disbelieved.”

How to hire Justin Willman

Call 888-593-7387 or email Funny Business Agency to get more information or to hire Justin Willman. 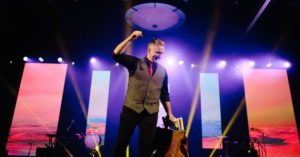