Oz Pearlman, a finalist on season 10 of “America’s Got Talent”

Oz Pearlman has been featured on TV’s number one rated show, America’s Got Talent. Week after week, he captivated the country with never-before-seen mentalism routines and quickly became a fan favorite, finishing in third place out of thousands of acts. Oz has also appeared on a variety of both national and international networks, a few of which include NBC’s Late Night with Jimmy Fallon, The TODAY Show & ABC World News and been profiled in Forbes, The New York Times, to name but a few.

Oz’s client list reads like a who’s who of politicians, professional athletes, A-list celebrities, and Fortune 500 companies. His natural charisma and charm make him the perfect choice for corporate events and private parties alike. Oz’s unique blend of mentalism and mind-reading create an interactive experience that is redefining the very nature of a magic show…one that truly needs to be seen to be believed.

Oz brings his award winning show to virtual events. It is engaging and very interactive. Your team be amazed and talking about it for weeks. Salesforce Virtual Event Feedback: “What an AWESOME event! Our team loved it, thanks so much.”

Custom options for your next event

Get more out of your upcoming holiday parties, sales meetings, conferences, awards banquets, hospitality suites, and other corporate events. Oz presents a fun, upbeat show that will keep audiences, ranging in size from 5 to 5,000 laughing and gasping in amazement.

The show is custom designed for today’s sophisticated corporate audience; blending mentalism, mind reading and a wholesome sense of humor into an intriguing experience like none other. The audience is actively involved throughout the entire performance and will feel like the stars of the show. Show your clients and employees how important they are to you and make this year’s event one they’ll never forget! 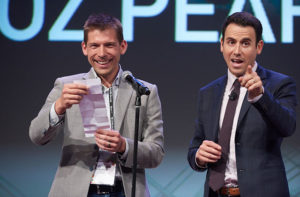 Oz serves as a perfect icebreaker and conversation starter, mingling amongst your guests and absolutely blowing their minds. From revealing the name of their first kiss to pulling out a sealed envelope with the details of a distant vacation, the impact of Oz’s performance will stay with audience members for years to come! Your guests will be astounded by Oz’s world-class mind reading and sleight-of-hand abilities, and delighted by his sense of humor and charm. This is a terrific option for cocktail hours, breakout sessions, holiday parties, networking events, and other casual environments to warm up a crowd.

Oz will work with you to customize a program tailored specifically for your audience and industry. His stage show is a highly interactive experience, involving dozens of audience members with a singular focus of creating long lasting impressions. You’ll see why companies throughout the country look to Oz to impress high-profile clients, dazzle employees and entertain senior management. This is the perfect fit for awards meetings, incentive travel, conferences, conventions, gala dinners and other formal events that involve a seated audience. 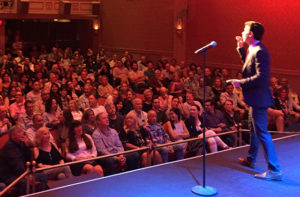 In today’s fast paced world, you need to truly capture a group’s attention or risk being lost in the noise. Oz has the extensive experience, easygoing charm and disciplined focus to ensure that your event flows smoothly. He is an expert at keeping an audience on their toes, mixing in your messaging with lighthearted humor and connecting on a deeper level. Oz can serve strictly as an MC or also blend in some amazing performances to keep things moving along in a fun manner.

"Spectacular performer, Oz was a huge hit at our leadership conference!"

"An absolute hit with our senior leadership team and made believers out of even the most skeptical in our group. I highly recommend him for any event!"

"Having seen Oz a few times, I can say his talent is truly spectacular; indeed, no matter how many times I see him, I am just as engaged, amazed and baffled as the first time."

"Oz is one of the most outstanding entertainers I have ever seen. He combines his incredible performances with a wonderful, funny, warm, and engaging personality — I couldn’t recommend him more highly!"

Oz Pearlman is truly a master of his craft. He will absolutely blow your mind and is one of the best entertainers I’ve ever seen!"

I’ve worked with a number of guest presenters, from war heroes, to politicians, to industry experts, to athletes. None prepared or showed more passion in doing a great job for our event than Oz did!"