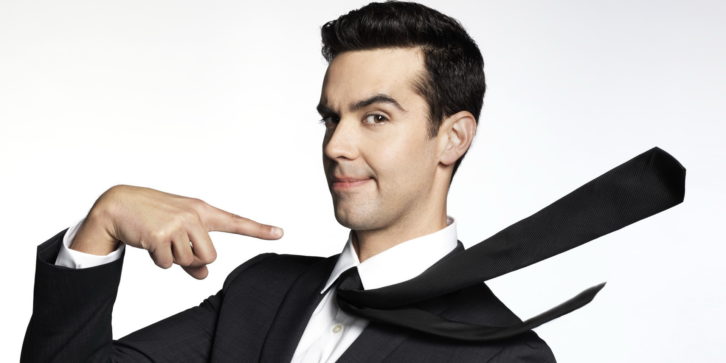 Michael Carbonaro is America’s favorite TV magician, for corporate events, conventions, sales meetings and more, your guests will thank you!

Michael Carbonaro is an Actor, magician, comedian and improv artist known for his original hidden camera magic series, THE CARBONARO EFFECT on truTV, Michael Carbonaro has been seen in recurring roles in television such as:  Happily Divorced, The Newsroom, 30 Rock, How to Make it in America, The Wizards of Waverly Place and CSI Miami.

Best known as the star and executive producer of the hit series, THE CARBONARO EFFECT on truTV, Michael Carbonaro has also made frequent television appearances in shows such as Happily Divorced, 30 Rock, Grey’s Anatomy, and CSI Miami. A performing magician since his youth, Carbonaro went on to study experimental theater at New York University with the aspirations of entertaining audiences through a variety of theatrical mediums, including hidden-camera magic, which he later showcased frequently on “The Tonight Show with Jay Leno”.

Following Carbonaro’s frequent late-night appearances, Michael was presented with the opportunity to launch his hit comedic series, “The Carbonaro Effect,” which has run for over 100 episodes on truTV. A trickster at heart, Michael performs inventive tricks on unsuspecting members of the public who are unaware that he is a magician. Jaws drop when he causes a car to disappear from under a security guard’s nose or makes alien crabs transform into kittens in a science lab. Whether posing as a coffee shop barista, museum curator, or seemingly unremarkable store clerk in the REAL world, Carbonaro’s illusions – along with his absurd, matter-of-fact explanations – leave REAL people bewildered and families at home laughing out loud.

Michael hosts and performs shows of comedy, magic and other acts for corporate events and private venues as well as various venues all over the US, including the ever popular Joe’s Pub, Caroline’s on Broadway, The Box, and Hollywood’s Magic Castle.

Michael is an OutFest Best Actor Award Winner and was just honored by The Academy of Magical Arts as Magician of the Year.

Join Michael Carbonaro for a LIVE interactive magic experience Zoomed right to your living room!  In this brand new show, Carbonaro comes to us not from outer space, but from a secret space (which may be his garage), hosting an intimate evening of magic and bizarre fun for the entire family to enjoy!  Experience the effect of Michael Carbonaro – LIVE, in this immersive experience where one moment you’ll be watching…  and the next, you may be IN the show! ​​

"A few other magicians and illusionists have made television shows by using their skills to punk the unsuspecting, but none have worked the gimmick better than Michael Carbonaro."

"A smart-ass with a heart of gold.

-TELLER (of Penn and Teller)