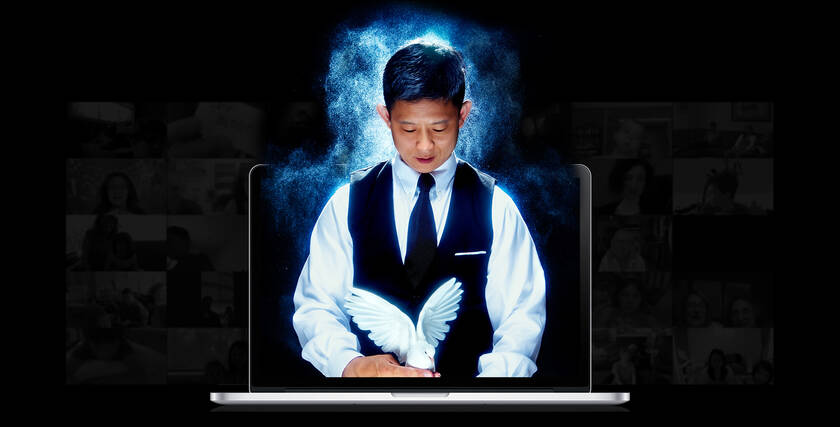 As an internationally renowned, award-winning mentalist & mind-reader, Dan Chan presents world-class magic and mind-reading. Experience counts. Dan is regarded as one of the world’s top virtual magicians and performs at events for thought leaders and influencers. Prior to pivoting to virtual events, Dan performed 5000 plus shows worldwide. Dan Chan provides the perfect entertainment solution for savvy corporate audiences. Dan’s signature effects and pick-pocketing are legendary among Silicon Valley elite and billionaires.

Dan Chan Master Magician has been called to entertain at many of the world’s most influential events because of his promise to deliver “sophisticated magic for intelligent audiences”.  With 20

Magic of the Mind is an interactive, fast paced show that interweaves suggestion, influence, and mind-control. Using a combination of misdirection, theatrical trickery, and keen observation Dan creates the illusion of telepathy and mind reading. Dan can reveal your innermost thoughts and other secrets no one else could know like the name you are considering for your unborn child or your birthday. He will even perform a signature effect that reveals a prediction not only on your own cell phone, but on every phone in the audience. Dan’s goal is to provide a sophisticated and thought provoking show that captivates even the most skeptical audience. Magic of the Mind includes Dan’s signature finale, ” The Ultimate Prediction “, where an envelope hung in plain view, or a time-stamped email sent prior to the start of the show, details every decision that happened throughout the evening.

Dan’s newest routine, “Yes/No Get to Know,” is perfect for team-building events. Co-workers get to know each other with a series of yes-no questions. Participants drop in the chat bar the most adventurous thing they’ve ever done. Then they vote on whether a co-worker would bungee jump, skydive, or even eat a rattlesnake – and of course, Dan gets it right every time! They also get to know Dan as he’s done all three.

In 2016 Buzzfeed profiled Dan with an article titled “Meet Silicon Valley’s Favorite Magician.” Since then, Dan has performed for many of the world’s largest corporations worldwide. The Hustle, The Business of Business, Voyage LA, Hollywood Monthly, and Business Insider have all featured Dan. CNBC featured Dan as one of the few top Airbnb Experience host to be granted IPO shares for his early contributions.

Now you too can experience what billionaires around the world have experienced, the ultimate virtual entertainment experience, from the comfort of your home!